The current state of init systems

Recently, the init systems’s world has been moving a lot. After many discussions, systemd have good chances to be adopted as Debian’s default init system. But, for those who do not really know what it is and mean, this information is pretty useless… or at least «just another news in a day».

According to Wikipedia: > […] init (short for initialization) is the first process started during > booting of the computer system. Init is a daemon process that continues > running until the system is shut down. It is the direct or indirect ancestor > of all other processes and automatically adopts all orphaned processes…

To my eyes, this definition needs additional informations. In fact, to easily understand the place and role of the init system in Linux, one might know the Linux startup process. And as a picture is worth a thousand words, here is one! 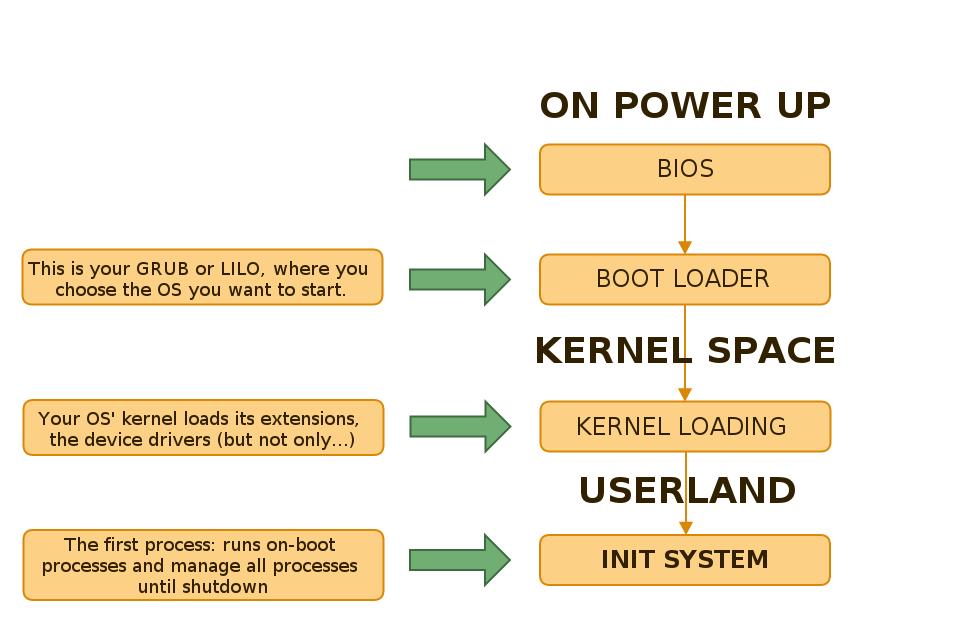 First, note that the schema has been highly simplified. Only one blog post will never suffice to describe the whole startup process. As you may notice, the main parts of the schema are commented, but still need some additional stuffs…

You missed one, and what’s that init system again?

The best part, or let’s say, the Human part of the Linux startup process is the userland. Once the kernel finished all its tasks, the userland space just take over and run all the tasks that are possibly runnable by users without too many risks. And that’s where the init system step in.

This one has been created to execute all the early run tasks like mounting the filesystem. Plus, it also manages all the process that will be spawned during the machine’s uptime until it gets shut down. Yes, even your nginx you launched 5 minutes ago is managed by the init system, what makes it its parent. So, init is the first process that is launched in userland (its PID is 1), and is the parent of all other processes. If one die, it knows it. And if init is killed, every other process dies with it. It is that simple.

Why are there so many init systems?

Initially, the default init system where just named after init («init daemon» or «SysV init»); but it went old and its designs are not suitable for our time anymore, so some replacements has been created.

However, from all the candidates, 3 has been widely used: OpenRC, upstart and systemd. All of them are Free and Open Source softwares.

From now, i will explicitely name the init daemon by SysV init. If init system is present, it means the generic initialization system (without distinction between daemons.)

Why is systemd winning the init war?

Since it announcement, systemd has been widely adopted. Practically all the major Linux distribution now enable it by default as there init system (Fedora, ArchLinux, RHEL 7 => CentOS, OpenSuse…) and it will be choosen for the next Debian release (Jessie). After Debian decided to use systemd, Mark Shuttleworth announced on his blog that this would be also an decision for Ubuntu as a part of the Debian family.

But why does it succeed? IMHO, one key of its success is the set of features it comes with. Instead of being a replacement for just Sysv init, it also comes with a complete ecosystem. Plus, the systemd startup scripts are not written as shell script but in a simple and powerful declarative language.

But apart the technical features, i think the biggest advantage it have against its concurrent are not even technical. And i will finish on these:

Some comments has been added via reddit, here is the thread: http://www.reddit. com/r/linux/comments/1xtg4j/the_current_state_of_init_systems/